Caitlin is now a Biomedical Engineering student at the University of Arizona with a passion for medicine, mechanical principles, and coding. As a Biomedical Engineer, Caitlin’s research and skills will lead to the creation of new medical devices, both complex, such as an MRI or an artificial heart, and simple, such as a blood pressure cuff. Caitlin has had a horse suffer through a flesh-eating bacterial and has seen entire barns quarantined due to equine disease. It is her hope that her medical skills, microbe research, and innovating diagnosis can be modified and applied to treating our equine companions.

2016 and 2017 scholarships funds were generously donated by

Jordan Haynes has been riding saddleseat for 13 years, winning numerous local, regional, and national awards, including 3rd place at the World Championship in Kentucky and 5th place in her division at the highly competitive American Royal National Championship.

Jordan's perseverance and sportsmanship are just two of the positive characteristics she attributes to riding.  Coming from a single family home, Jordan has a "no quit" attitude that she says she learned from her mother.

She credits her mother for her learned ability to deal with difficult decisions, maintaining a "never quit" attitude, and a belief in personal responsibility. Jordan chooses to live by example and says her competitive riding has instilled good sportsmanship, even when it has at times been humbling. "I have developed a mindset of always finding the best in every situation." Adversity in and out of the arena, she says, have taught her independence, resiliency and confidence.

Five years ago, Jordan began instructing beginners in horseback riding and hopes to pass on her joy of riding to others. Watching young riders self esteem and confidence soar as their skills improve gives her a deep sense of satisfaction. She is now a lead summer camp counselor for her barn. 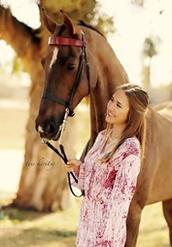 The ASAA educational scholarship was created to inspire excellence within the Saddlebred youth population as well as to foster continued interest in the breed and participation in our shows and events. Consideration is also given to academic success. Our award monies total $1,000. Additional amounts are possible through matching grants and individual donations.

Applications are open to high school juniors, seniors, and college freshmen. Awarded funds are to be used for educational purposes only and may include tuition, books, and/or room and board.  Awarded funds will be paid directly to the educational institution as indicated by the recipient.

This Scholarship may be granted to the same individual more than once, however, a new submission must be made each year. The total scholarship monies may be divided as determined by the Scholarship Selection Committee but may not exceed $1000 unless additional donations are received that are specifically directed toward the 2019 scholarship award fund.

General information about the scholarship is found on the guidelines page. The completed application, attached transcripts, and letters of recommendations must be received electronically or be addressed and postmarked to the ASAA office no later than February 17, 2019. A committee will review the application. Recipients of our scholarship demonstrate a commitment to the American Saddlebred industry and academic success. Please keep the following Statement of Philosophy in mind as you prepare your application. 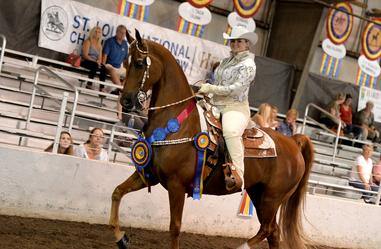 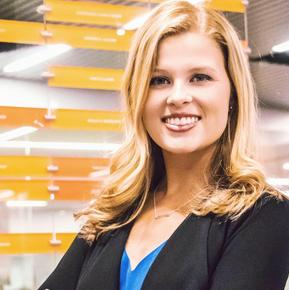 ASAA member Emily Burg of Scottsdale, Arizona was one of three chosen from a competitive pool of applicants to be awarded a $5000 American Saddlebred Horse Association Youth Scholarship.

Other recipients include Shelby Erickson from Elizabethtown, KY and Rachel Sanford from Mooresville, NC.  A formal presentation will be made on Friday night of The 2016 World Championships in Louisville, KY.

Jordan's current goals are to graduate college with honors and go to law school. We are sure she will accomplish any goal she sets out for herself. She says that horses have been a constant presence in her life and planes to keep them in her world forever.

Jordan is an exceptional young lady and an amazing ambassador for Saddlebreds!

"I take the sun, and I throw it.~ Marie Curie

Caitlin Moffett's interest in horses began as a young child. After an early diagnosis with Stage IV Neuroblastoma, a malignant and terminal cancer, followed by two years of chemotherapy and bed rest, Caitlin was encouraged to participate in sporting activities to rebuild lost gross muscle motor skills and muscle mass. After trying several sports without success, her mother, Megan Murphy-Moffett, suggested riding. Caitlin was given a picture book of breeds and was asked which one she liked best. She chose the American Saddlebred and it was an instant fit.

Throughout her riding career, Caitlin has been an archetypal example of excellence in the ring and an ambassador for the Saddlebred breed. She was a member of the youth riding groups at Yount Stables, Bridleway Stables, and Matthew Roberts Stables. As an active member of ASAA’s Junior Committee, she volunteers for all ASAA sponsored events. Her community service credits include the Society of Female Scholars and National Honors Society, which she enlisted to volunteer for the Carousel Charity Horse Show. For ASAA, she works as a liaison with The Girl Scouts of America in planning a daylong event at Carousel where the scouts experience a show and earn merit badges. She also helped ASAA in becoming a member of Amazon’s AmazonSmile charity program, was instrumental in introducing the beloved Pony Pitch to ASAA shows and manages the coordination of its ticket sales, and has orchestrated fundraising booths for breast cancer research and other Carousel charities of choice. She is a regular presence in the center ring as a ribbon presenter and at the High Point Awards Banquet to sign in guests and present awards. As a rider, she has been awarded numerous tri-color ribbons. The highpoint of her amateur career was being named the Shatner Western Pleasure World Championship in September of 2014 and she is the only junior rider to win the National Western Pleasure title. She continues to show locally and rides with her the University of Arizona Equestrian Team, which recently qualified for Nationals in Tennessee. She is the only Saddlebred rider on the University of Arizona team.

DONATIONS TO THE SCHOLARSHIP FUND ARE WELCOME!