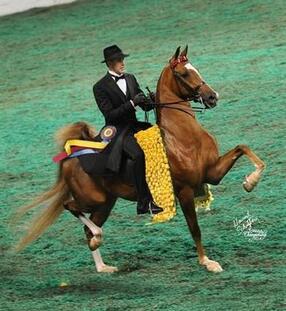 Breeding occurred in the 1600's in a manner similar to how designer dogs are bred today. Through a combined breeding of different breeds, the ideal horse was created for ease of gait, strength and beauty. The American Saddlebred traces its roots to the natural-gaited Galloway and Hobbie horses which came to North America from the British Isles. These horses were bred and developed into the Narragansett Pacer.
In the early 1700's Thoroughbreds were imported and bred with the Narragansett Pacer, to create what was known as the American Horse. The Thoroughbred brought size and beauty to the breed, while the Narragansett Pacer contributed to the wonderful natural gait. The American Horse of the 1700's was prized for its pleasant temperament, eagerness, strength and stamina.

Throughout time, the American Horse continued to be improved upon with continued Thoroughbred breeding and the addition of Arabian and Morgan breeding, and later the Hackney. By the first horse shows held in Kentucky and Virginia, held in the early 1800's, what was then referred to as the Kentucky Saddler continued to be in the blue because of its beauty, style and utility.

The first documentation of the American Horse was in a 1776 letter to the Continental Congress from an American diplomat in France. His request for the horse was for a gift for Marie Antoinette. By the 1800's the American Horse had moved west and was being sold as the Kentucky Saddler all across the nation. In 1839, a Thoroughbred son of imported Hedgeford named Denmark, was foaled in Kentucky. Bred to a natural-gaited mare, he sired Gaines' Denmark and established the Denmark family of American Saddlebreds. More than 60 percent of the horses in the first three registry volumes of the American Saddlebred Horse Association trace to Gaines' Denmark.

During the Civil War, the Kentucky Saddler was used for it's superiority on the march and on the battlefield. The majority of high-ranking officers in both the Union and the Confederate armies rode Saddler type horses. Lee rod his Traveller, Grant was on Cincinnati, Sherman rode Lexington and Stonewall Jackson was on Little Sorrell. The first three were Saddler type with close Thoroughbred crosses. The latter was from pacing horses. Generals John Hunt Morgan and Nathan Bedford Forrest rode, exclusively, Kentucky Saddlers. So important were the horses that after the surrender, General Grant allowed Confederate veterans to keep the mounts they owned.

In 1891, the American Saddlebred Horse Association was founded in Louisville, Kentucky. It was the first such organization for an American breed of horse. The original name was National Saddle Horse Breeders Association.

CHACTERISTICS
​
The American Saddlebred is known as the peacock of the horse world. The majority of its history is focused on its beauty and elegance as a show horse. It is its winning record in the early horse show circuits that created the demand for this magnificent American horse and help shape its breeding history.

Shown in a cutback saddle or shown in harness, the Saddlebred is a flashy, high-stepping horse with exaggerated action. The Saddlebred is very sensitive and alert. The ideal American Saddlebred is well-proportioned and presents a beautiful overall picture. Its eyes are large, wide-set and very expressive. The intelligence of the breed is apparent when looking into is eyes. It has gracefully shaped ears set close together are positioned on a well-shaped head. The neck of the Saddlebred is long with a fine, clean throatlatch.

The neck is arched and well-flexed at the poll. The American Saddlebred withers are well-defined and prominent, while the shoulders are deep and sloping. Well-sprung ribs and a strong level back also characterize the breed. The legs are straight with broad flat bones, sharply defined tendons and sloping pasterns. Saddlebreds are usually black, bay, or chestnut, but grays, cream dilutes, champagnes, tobianos, sabinos, and splash overos are also seen. Dun, frame overo, rabicano, appaloosa patterns, and true roan are not seen in the breed. The average height is 15 to 16 hands (6o to 64 inches, 152 to 163 cm), but can range from 14.2 to 17 hands (58 to 68 inches, 147 to 173 cm).